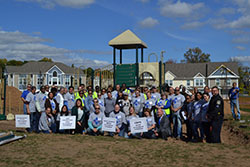 Over a two day period, October 11 - 12, 2016, employees of The Simon Konover Company and residents of Industria Commons and Brytania Square worked together to build a playground for the children of the two residential communities. New Britain Mayor Erin Stewart, accompanied by Alderman at Large James Sanders, Jr., visited the project on October 12th to recognize the volunteers for their efforts.

Located at Industria Commons, the playground features a large playscape incorporating 14 different play activities, as well as a swing set. The playground is designed for children of all abilities ranging from toddlers to age 12.

Local companies donated goods, services and financial resources to fund the $40,000 project, including D&R Construction, CWPM, LLC, Tilcon Concrete, Dubaldo Security Systems and Adinas Pizzeria. Over 150 volunteers, including employees of The Simon Konover Company and residents of Industria Commons and Brytania Square prepared the site, installed the equipment and finished the playground over two days.

Industria Commons and Brytania Square are owned and managed by affiliates of The Simon Konover Company (TSKC).