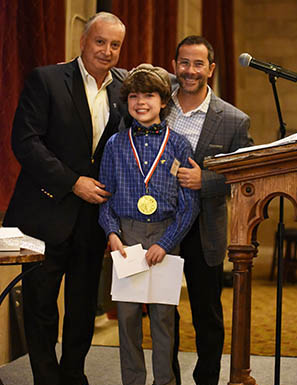 The Simon Konover Company (TSKC) and The Hole in the Wall Gang Camp held a celebratory event to mark Team Simon Konover’s remarkable success in raising a cumulative total in excess of $1,000,000 to benefit the Ashford, Connecticut camp.

The Thanks A Million event was held October 18, 2017 at the Society Room in Hartford, Connecticut and included representatives from The Hole in the Wall Gang Camp, The Simon Konover Company and the more than 70 companies who joined Team Simon Konover for the 2017 Camp Challenge Campaign.  Jimmy Canton, CEO and Ray Lamontagne, Board Chair of The Hole in the Wall Gang Camp spoke at the event.  Guests also had the privilege of hearing from a 12-year old camper who spoke about his experience at the Camp.

“Team Simon Konover has followed in the footsteps of Paul Newman and Simon Konover, two incredible philanthropists,” said James Wakim, President and Chief Operating Officer of The Simon Konover Company to the guests gathered.  “Every person in this room tonight is a hero.”

Team Simon Konover is comprised of company employees and business associates who support and participate in the Camp Challenge event.  Over 90 individuals and organizations joined Team Simon Konover for this year’s campaign.

“We are so grateful to our heroes who have joined Team Simon Konover in our commitment to Camp, the children and their families,” said Mr. Wakim.  “Together, we raised enough funds to send more than 400 children to camp.”

Five companies were recognized at the event for their annual contribution to Team Simon Konover since its inception in 2009.  The companies are Cohn Reznick, Juliano & Marks, LLP, Shipman & Goodwin, LLP, Titan Energy and Waterford Group Charitable Foundation.

“Since Hole in the Wall’s earliest days, The Simon Konover Company has stood beside Camp and helped to make ‘a different kind of healing’ possible for thousands of seriously ill children and families,” said Jimmy Canton, CEO for The Hole in the Wall Gang Camp. “For nearly a decade, Team Simon Konover has provided a platform to rally their entire network of employees, partners, vendors and friends to support Camp’s mission. The million-dollar threshold is the culmination of nine years of unwavering dedication to the Camp Challenge event and incredible leadership from Jane Coppa, Jim Wakim and the entire TSKC team. We are forever grateful and inspired by their generosity.  Their kindness makes the world a better place.”

TSKC’s involvement with The Hole in the Wall Gang Camp began in 1987 when Simon Konover donated the company’s construction management services as he constructed the original Camp facilities.  Since that time, TSKC, as well as the Konover and Coppa families, have demonstrated an ongoing commitment to the Camp as an active sponsor of the Camp’s Annual Fandango Benefit Gala, the Space & Aviation Day, as well as the Camp Challenge Ride.