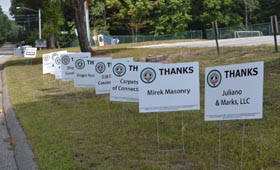 The Simon Konover Company (TSKC) and its Team Simon Konover raised over $130,000 in the 2014 Camp Challenge Ride & Bandit 5K campaign to benefit The Hole in the Wall Gang Camp.

“We couldn’t be more grateful for the longstanding friendship of The Simon Konover Company, which allows The Hole in the Wall Gang Camp to continue to grow and serve an increasing number of seriously ill children,” said James Canton, CEO of The Hole in the Wall Gang Camp. “Their ability to rally their executives, employees and strategic partners around our mission to fundraise as a Team is remarkable and shines a light on their outstanding commitment to Camp.”

TSKC’s involvement with The Hole in the Wall Gang Camp began in 1987 when Simon Konover donated the company’s construction management services as he constructed the original Camp facilities. Since that time, TSKC, as well as the Konover and Coppa families, have demonstrated an ongoing commitment to the Camp as an active sponsor of the Camp’s Annual Fandango Benefit Gala, the Space & Aviation Day, as well as the Camp Challenge Ride. In addition, Jane Konover Coppa is a member of the Camp’s Council of Advisors. To learn more about TSKC’s involvement at The Hole in the Wall Gang Camp, visit our leadership profile at http://www.holeinthewallgang.org/page.aspx?pid=966.

About The Hole in the Wall Gang Camp

Founded in 1988 by Paul Newman, The Hole in the Wall Gang Camp is a community dedicated to providing “a different kind of healing” to seriously ill children and their families through a variety of year-round programs. The Camp delivers fun, friendship and a healthy dose of mischief through its signature summer program and weekend sessions at the Camp facility in Ashford, Conn. as well as outreach to hospitals, clinics and communities across the Northeast. All services are free of charge. For more information, visit www.holeinthewallgang.org.