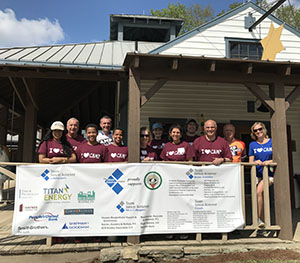 The Simon Konover Company (TSKC) and its Team Simon Konover raised over $140,000 for the 2017 Camp Challenge Ride & Grit ‘N Wit charity event.  Team Simon Konover has raised a cumulative total in excess of $1,000,000 since 2009, directly benefiting The Hole in the Wall Gang Camp in Ashford, Connecticut.

In 2009, The Simon Konover Company was instrumental in launching the Camp Challenge Ride annual charity event to benefit the Camp.  Since inception, Team Simon Konover has been a lead sponsor of the event every year, and has consistently been the highest producing team in the event.

Team Simon Konover is comprised of company employees and business associates who support and participate in the Camp Challenge event.  Over 90 individuals and organizations joined Team Simon Konover for this year’s campaign.

“We are so grateful to our partners, colleagues, associates, and friends who have joined Team Simon Konover in our commitment to Camp, the children and their families,” said Mr. Wakim.  “Together, we raised enough funds to send more than 400 children to camp for free.”