Simon Konover was 26 in 1948 when he arrived in Hartford, a Holocaust survivor and nearly penniless. In the decades that followed, Konover, now 87, would build one of the area's most successful development companies, at one point developing and owning more than 100 shopping centers in the Northeast and Florida.

This year, Konover, president and CEO of the Simon Konover Co. in West Hartford, is celebrating 50 years in the development business and has become widely known for his philanthropy. He is a founder of the U.S. Holocaust Museum and recently endowed the Doris and Simon Konover Chair of Judaic Studies at the University of Connecticut. 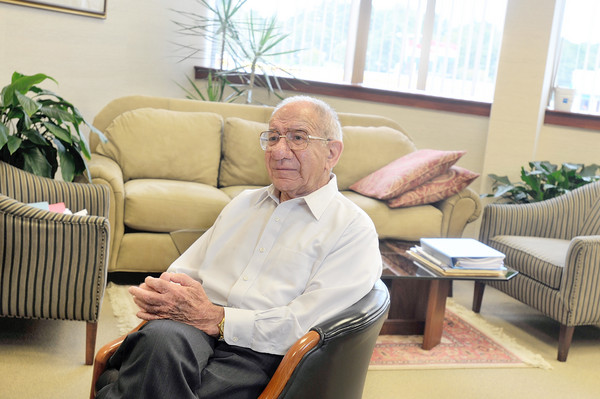 Q: Did your early experiences as a survivor of the Holocaust and Russian labor camps influence your entrepreneurial spirit?

A: Yes. For six years, I was running for my life, basically. And sometimes no food, hunger and everything. I knew I had the capabilities but I never had the opportunity. When I saw the Statue of Liberty — I came by boat — I felt like a free bird. I can do anything I want. In Russia, you never knew when you were going to disappear. They could knock on your door and take you away.

Q: After your arrival in Hartford, you worked as an auto mechanic and in your brother's floor-covering business. Why did you eventually choose real estate development?

A: When I was working for my brother, I got to know a lot of builders and developers and I just loved to own real estate. I just fell in love with it. When I built my first little hotel, it was an instant success. You build a building and you own it and it brings in income.

Q: Will this recession leave a mark on the real estate development business?

A: I hope it does. The banks gave out too much money. Too loose with appraisals and who could afford it and who couldn't afford it. Money was so easy to get that everybody became a developer, whether it made sense or not. I asked a couple of people that built hotels: "Why would you build hotels when the market is so soft?" They said, "They gave me the money, so I built." Scary. Believe it or not, a lot of people just did that.

Q: You've mentioned a conservative approach to development deals. Has that helped you weather this recession better than some of your competitors?

A: We were either lucky or smart enough because we've been in business for 50 years. We didn't do a lot of deals. That's why we are in good shape today. We did decide to experiment with some condos. It did not work for us. However, we are sitting and waiting.

Q: After 50 years, which project are you most proud of?

A: The projects that I am most proud of are the affordable housing that I built and also the Hole-in-the-Wall Gang campus, [at] Paul Newman's camp in Ashford. This was a labor of love. We were the general contractor and donated all the services.

Q: You built a remarkable development company and have become a well-known philanthropist in the community. What would you like your legacy to be?

A: I'm not going to be a billionaire. I have provided for family very nicely and, I think, we have a wonderful reputation. My daughter is taking over and my son, both of them, and want to continue this business. We are a pretty good-size company, but we are a family company. I feel as though we are a family here. ... I want to do good and make a better world. Unfortunately, it isn't there yet.