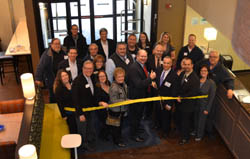 Keith Kozierowski, General Manager of the hotel, opened the event and welcomed dignitaries and guests.

“This celebration marks the completion of a multi-million dollar top to bottom renovation of the hotel,” said Mr. Kozierowski.The Holiday Inn Express & Suites Roseville renovations included a new lobby and breakfast area, upgrades to all guest rooms and improvements to the meeting room, exercise room and pool.

“This ribbon cutting celebrates a significant investment in the future of this hotel,” said James Wakim, President and Chief Operating Officer of The Simon Konover Company. “It represents our commitment to excellence and to this community.”

Mayor Chirkum and James Wakim cut the ribbon in the newly renovated lobby surrounded by members of the Eastpointe-Roseville Chamber and the Sterling Heights Regional Chamber of Commerce.