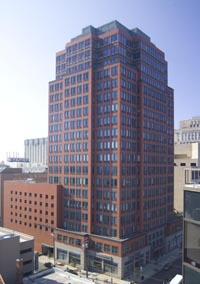 One Century Tower, located at 265 Church Street in New Haven, was recognized by the Connecticut Department of Energy and Environmental Protection (CTDEEP) for its commitment to energy reduction.

In a ceremony held April 22, 2014 at the Connecticut State Capitol, One Century Tower Building Association and its two unit owners, Wiggin and Dana LLP and Century One Limited Partnership, were recognized with the Summer Saver Silver Award. The Silver Award is given to organizations achieving a ten to twenty percent reduction in electricity consumption.

According to the CTDEEP, “The Summer Energy Savers Awards program was instituted to encourage and reward Connecticut businesses and institutions who reduced their electricity consumption during the summer months.”

One Century Tower, a 20-story 270,000 square foot Class A office tower, is owned by Wiggin and Dana LLP and Century One Limited Partnership, a Konover-related partnership, and is managed by Konover Commercial Corporation. A series of conservation measures were implemented between 2012 and 2013, including installation of a new Siemens Energy Management System. Energy consumption at One Century Tower was reduced 20% over a two year period.

“This award is a testament to the conservation efforts of the property management team and unit owners, as well as assistance provided by Siemens and United Illuminating Company,” said Elizabeth Judd, President of Konover Commercial Corporation. “Reducing energy consumption is good business practice and good for our environment.”

Eleven businesses were recognized at the event, which was celebrated on Earth Day. The 2014 event was the 11th Annual Awards Ceremony.