KHC's Ken Kwiatkowski is a Star of the Industry 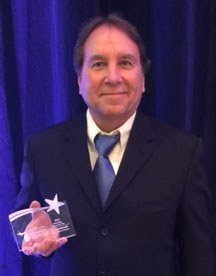 Konover Hotel Corporation’s Ken Kwiatkowski was recognized as a 2015 Star of the Industry by the Michigan Lodging & Tourism Association (MLTA) at the 2015 Pure Michigan Governor’s Conference on Tourism held March 22-24 in Grand Rapids, Michigan.

Mr. Kwiatkowski was recognized by the MLTA as the 2015 Operations Star of the Year. As the head of Maintenance at the Holiday Inn Express Adrian, Mr. Kwiatkowski has led the continued effort to integrate environmentally-friendly green components into building operations. In addition, he implemented several operational and preventive maintenance measures resulting in significant cost savings for the property.

“Ken has distinguished himself as a leader at this property and an integral part of our management team,” said Peter H. Mason, CHA, Executive Vice President of Konover Hotel Corporation. “His leadership and expertise have greatly contributed to the ongoing success of this hotel.”